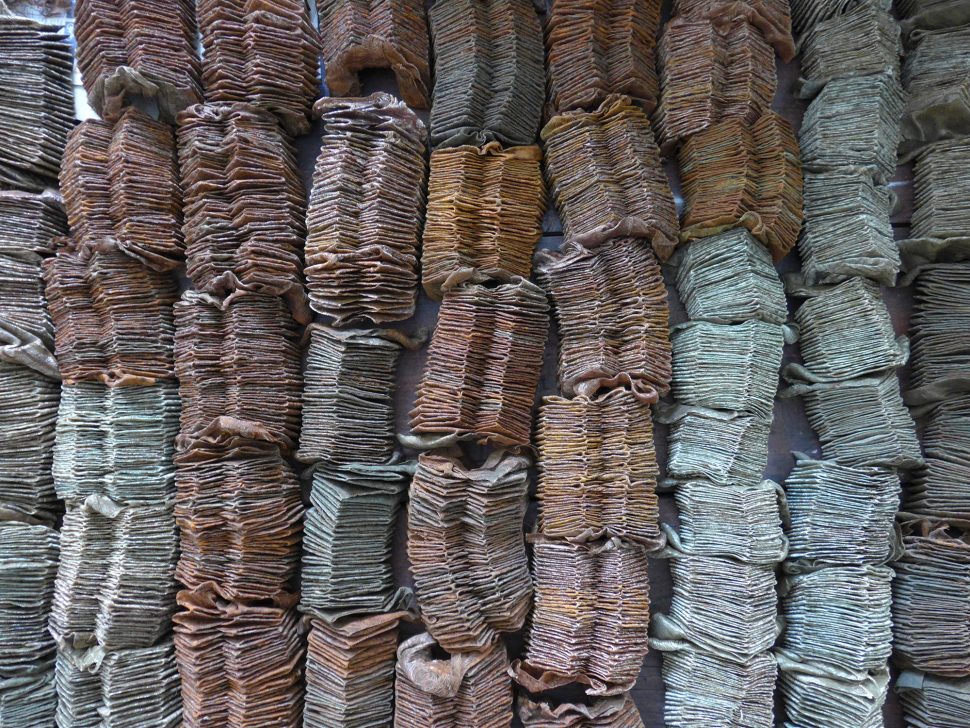 Making textiles for the Braavosi in Game of Thrones

Now that the season has ended, I can write and show more of the work made for the Braavosi in Season 4 of Game of Thrones.

Braavos is the northern-most, richest, and arguably the most powerful of the Free Cities in Game of Thrones.  The city is made up of hundreds of tiny islands, and the Braavosi – renowned seafarers and swordsmen – also control the surrounding lagoon.  A giant statue of the Titan of Braavos guards the harbour entrance of the city.  Unlike Westerosi nobility, wealthy and powerful Braavosi favour wearing dark colours.  The adornments of their outfits are representative of their social status. The Braavos bankers wear intricate pleated silk ruffs, which were inspired by fabrics I created some time ago.

For a few years I have been exploring a variety of oxidation processes. I started working with un-galvanized iron nails, which have become increasingly hard to find. The objects themselves left a very interesting mark on the cloth. The faded rust of the Phantom of the Opera’s cloak was created this way, carefully controlling the placement of the nails and leaving it to oxidise in an acidic solution.

The tubular rusted pleat was originally created for the series Souvenirs Entomologiques and is essentially a silk metallic organza which has been distressed, coated with metal rust and then pleated. When I originally developed this process it was a real breakthrough, and inspired me to research pleating, three dimensionality and the sculptural qualities of cloth – ideas I discussed in my previous post.

Later on I started working with very fine iron dust that can be mixed with a binder to make it more controllable and safe. However, large scale production always proves challenging as the atmospheric conditions (temperature, humidity levels, draughts in the working space, and so on) have to be just right for the oxidisation to happen.  For example, if it’s too warm the cloth can dry too quickly for oxidisation to occur.

For the Braavosi we produced 60 metres of rusted silk, 30 metres of which were also distressed, and 12 metres of the distressed silk was made into panels for the ruffs. I worked on a variety of samples and prototypes of which we choose two different styles: the diamond and the double diamond pleats, with different base colours and gradations of oxidisation.

The moulds were created specifically for these ruffs, made from special parchment paper that is drawn, scored and folded by hand.

The fabrics were then placed in the moulds and pleated, with each length becoming one third of each of ruff.  These panels were then given to the amazing makers in the work room, who constructed the finished ruffs.

The ruffs were worn by the bankers of the Iron Bank as well as the prostitutes of Braavos, adorned with  jewellery-like fabric pieces.