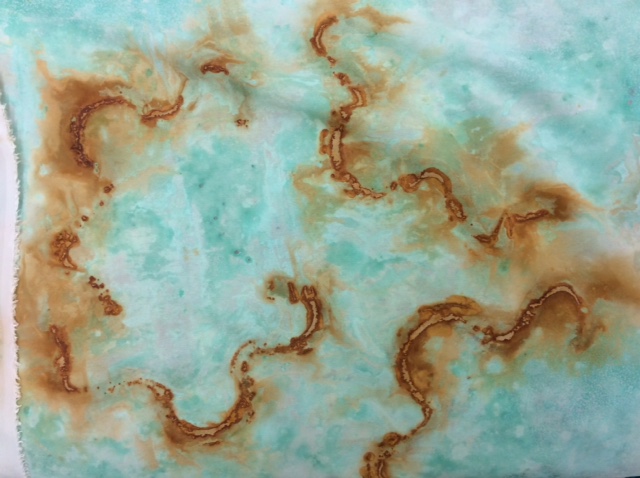 Erode workshop at Savannah College of Art and Design

This was the title of a two day workshop I did with textile students of Savannah College of Art and Design in Georgia, US.

In October last year I was invited as a guest lecturer to run a two day workshop and take part in some of their classes, as well giving some tutorials. It was a very enjoyable experience, I found the students enthusiastic and the facilities and organisation impeccable.

The students who took part in the workshop had shown an interest in being involved and they came prepared and open to experiment with a new process, with all the uncertainty that this brings. They had different training, different cultural origins, and very different sensitivities, but they were all given the same tools: binder with iron and copper filings, acetic acid, rusty objects and natural fibres. To be able to control the environment is key when working with the oxidation of metals and I was able to share with the students anecdotes of the various commissions I have done working with this process; you learn so much from working in the middle of winter in Prague or in the draftee harbour of Belfast. This time I was in humid Savannah … and luckily enough it was Autumn and not July.

Working with a small and enthusiastic group meant that the experience was very playful. I introduced the students to references such as the early work of Hussein Chalayan, Richard Serra’s large scale works of sheets of metal and the beautiful experiments of Riko Sudo for Nuno.

I also introduced them to Jonathan Meades’ documentary Isle of Rust, possibly a rather esoteric reference for students not necessarily familiar with the idiosyncrasies of Britain.

I gave them some time to become familiar with the pastes, as we had both iron and copper filings, and we also had a chance to test some other binders and gums to carry the filings. One of the great things about workshops like this is that the learning process is mutual.

They brought lots of objects to work with that were used to wrap and make marks on the fabrics. I introduced manipulation techniques such as shibori to resist and control the rusted areas of the cloth. That evening we left the lab smelling of acidic solutions to allow the magic to happen.

Using some of the of fabrics they had already worked on, the students then had a chance to use foil and flock to add layers of depth: hints of gold, copper and silver foil or cleverly placed flock cut-out shapes enhanced the silks and cottons. Some went foil mad!

The results were playful, delicate, intriguing … most of the students were able to apply these processes to their work, testing it on a variety of materials beyond fabric.