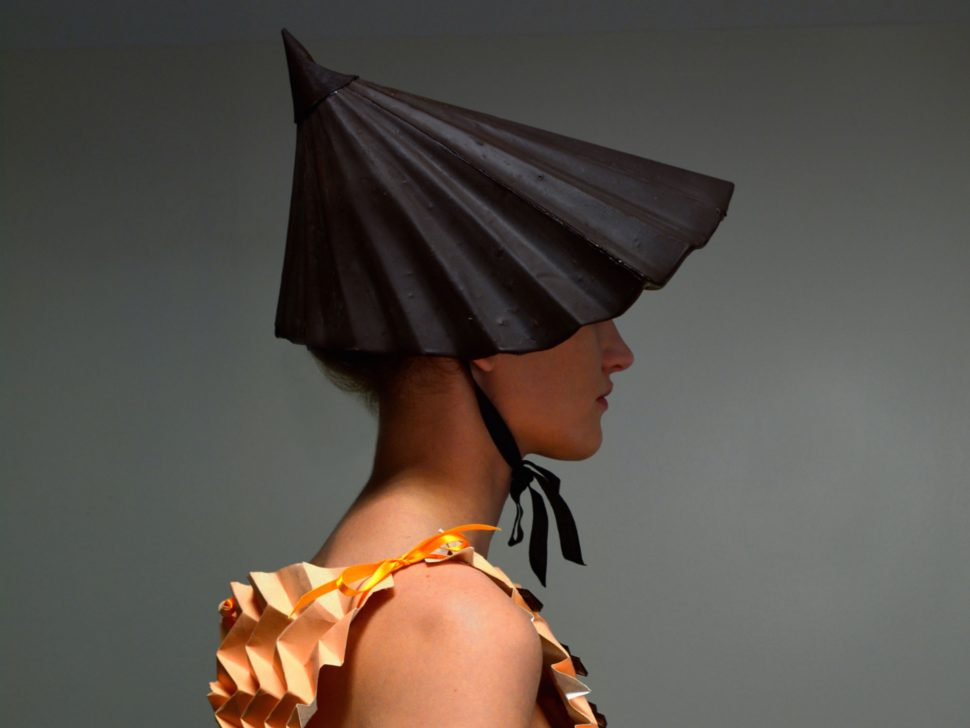 Edible Surfaces was initially an exploration of the parallels between the making of textiles and chocolate making. The project is now starting to grow into a larger exploration of the processes involved in the making of textiles and food, with the aim of developing new concepts and aesthetics for edible products. By bringing the perspective and knowledge of textiles to food production this project has opened new avenues for the presentation of chocolate, but similar principles could be applied to other foods.

Food and design have a long-standing relationship: bread makers, chefs, chocolatiers and pasta makers have all been shaping the flavours we know. One could even argue that nature itself has evolved beautiful designs for familiar foods. Beppe Finesi, the curator of the MART Museum exhibition Food Project: the shape of taste in Trento, Italy – where Pinaki Studios was invited to exhibit Edible Surfaces – made exactly this point by selecting the studies about Bruno Munari’s orange as a starting point to explore the forms of traditional breads and the intricate designs of industrial foods. When it comes to food Italians get it right, don’t they?

The ideas for Edible Surfaces had been evolving for a while when Leslie Vanderleeuw, a materials expert at Nike Europe, came to visit the studio with her husband Erik Spande to talk about our textiles. It so happened that Leslie and Erik also ran a premium chocolate shop in Amsterdam and what was originally a fun chat about a possible “delusion” became a project that had a great response from publications, curators and audiences. This enthusiasm inspired us to develop the idea further by involving a third party, the Hungarian chocolatiers Rózsavölgyi Csokoládé, run by Katalin and Zoltan, who Leslie and Erik knew from their delicious and beautifully-packaged chocolate bars.

While the three companies prepare to make Edible Surfaces a commercially viable product, Leslie, Katalin and myself had fun working on another project: a collaboration involving fashion, pleats and chocolate. The Salon du Chocolat is a yearly event that takes place in Paris and was the perfect showcase for our three-way project. Rózsavölgyi Csokoládé was invited to take part in the Salon fashion show, in which a number of exhibitors show a wearable piece modelled by a French celebrity.

We looked into our backgrounds and into references we shared a passion for. Through our discussions (inevitably happening at random times of the day and night) we drew inspiration from samurai armour, the raw aesthetic quality of Michel Gondry, the sensual surrealism of Elsa Schiaparelli, traditional origami, material trends … well, the list is endless.

Once I researched the kind of paper suitable to make a dress that was going to be worn multiple times, dying and folding the various patterns was perhaps the easy part. The choice of pleated pattern was made based on the silhouette we wanted to create. We were very clear about the fashion statement we wanted to make: a garment and a presence that was visually beautiful and removed from the conventional aesthetics of traditional chocolatiers. We also wanted to make a piece that reflected the humour and fun we had whilst creating it – Edible Surfaces took its time, materialising naturally, and the piece for the Salon was created with a similar attitude and philosophy. The dress was constructed from pleated paper, while the embellishments and accessories – the hat, umbrella and dog-shaped origami handbag – were all made by Katalin using chocolate that mimicked folded paper.

Edible Surfaces is an evolving concept: I currently daydream about edible “still lives” inspired by a venue or space, and exploring more general ideas about food making and its history with wit and humour. I am also interested in ways of involving audiences, not just by intriguing them but actually engaging them in the process of making things from familiar edible materials and unfamiliar textile techniques. I would also like to extend collaborations to industrial foods and other craft-based “anonymous foods”, and to investigate the natural good design in relation to concepts and processes I work with in textiles such as print, folding, pleating…